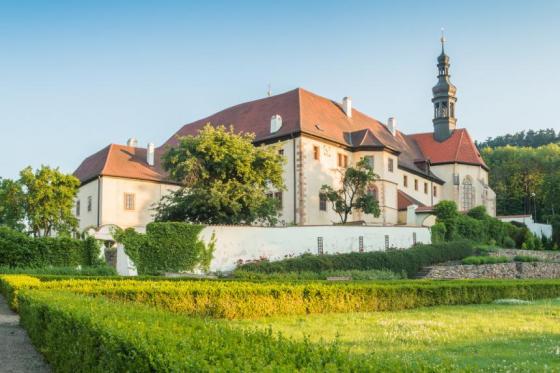 The Franciscan Monastery lies on the edge of the town of Kadaň, Czech Republic and near the river Ohře. Its history dates back to the 15th century. It is now the seat of the Municipal Museum of Kadaň with e.g. the exposition of the conventual life. The church dedication to Fourteen Holy Helpers shows the contacts to then popular German shrines of the same cult. Around the building is a beautiful vineyard, a French park and a lot of plum trees. The monastery was ranked among the national cultural monuments by the Ministry of Culture of the Czech Republic in 1995. The monastery faces the Úhošť hill on the opposite slope of the Ohře valley.

The first building on the site of the present-day Franciscan Monastery in Kadaň was a moderate holy shrine first mentioned in 1469. At Easter 1473 Franciscan Order assumed the shrine and with the support of Kadaň inhabitants and the House of Vitzhum built a temporary Convent house around it with the view of building a stone monastery. The Order experienced bloom and expansion in Bohemia particularly after the visit of Saint John Capistran. The monastery was built in several periods between 1473 and 1500. The sanctuary of the church with the quadripartite rib vault was built first and it was dedicated by Hierapolitan bishop and auxiliary bishop of Regensburg Johann Ludwig in 1480. The three-aisled nave with sexpartite rib vault was finished in 1493 and dedicated by bishop of KamieŠ„ Pomorski Benedikt of Valdštejn. All the monastery was probably completed by 1500. The walls of the church were decorated with abundant Gothic and Renaissance paintings that are now being restored. The first presumptions show affinity to Lucas Cranach school.

In 1481 the monastery was handed over to the Jan Hasištejnský z Lobkovic. Its development reached the peak in 1522 when the provincial Franciscan school was established. However, the monastery was abolished in 1564 in connection with the stormy spread of Lutheranism in the area. It was soon reestablihed by Jiří Popel z Lobkovic but was corrupted again after the 1618 uprising.

The revival did not come until the second half of the 17th century when the buildings were renovated and the church received new furniture and fixtures. The 18th century brought several unfavourable events. French soldiers of the anti-Habsburg coalition used the church as their shelter while withdrawing after they had been driven from Prague by the army of Maria Theresia in 1742. The church became a witness to a bloody exchange of gunfire. The riddled Baroque door still evokes those moments.

The monastery escaped abolition during Joseph II's reforms by a hair's breadth. The number of monks was, however, limited from thirty-six to twelve.

During World War II the Franciscans had to surrender half of their monastery to the Wehrmacht for Hitlerjugend needs. Communists closed the monastery in 1950 and it was used as a record office's depositary and got dilapidated due to insufficient maintenance. In 1991 the monastery was given back to Franciscans but they passed it over to the favour of Litoměřice diocese in 1994. The diocesan officials entered into the agreement with the Municipal Office to lease the monastery to the town of Kadaň. The has been giving means to reconstruct the valuable interior and wall frescos. In 1999 the newer parts of the buildings were dedicated to the Elementary Music, Dancing and Fine Arts School and a permanent exhibition of mining was opened in the cellars. The Municipal Museum was inaugurated in May 2004.

The Church is dedicated to the Annunciation of Jesus Christ and to the Fourteen Holy Helpers. It was built in the Late Gothic style with a ribbed vault and the pointed windows. The furniture and equipment is from the Baroque period.

The Franciscans are a mendicant order, which is why they did not own the church and the monastery. Therefore the king owned the buildings (at the time of its erecting Ladislaus II Jagellion was on the throne) or an aristocrat. In 1481 the dynasty of Lobkowitz became the owners. They had been the baillie holders of Kadaň from 1469. In the sanctuary is their family vault. The secular founder of the monastery is Jan Hasištejnský z Lobkovic. That is why his tomb is the biggest and most beautiful. Originally it stood above the grave of the founder, but during the Baroque period the church was rebuilt and Franciscans put it against the wall. Today nobody knows where the grave of the founder might have been.

The high altar is the dominant feature in the church. On the altar are two wonderful statues – on the left the statue of St. Francis of Assisi, the founder of the Franciscan order, and on the right the statue of St. Anthony of Padua, who holds a lily and the child Jesus Christ in his hands. The legend of the inception tells about a noble family whose five brothers once offended the monarch. They should have been executed but the intercessions of Kadaň inhabitants made the monarch have mercy on the future of the family and symbolically punish just one of the brothers. They played at dice to decide who would hang for the others. The lot fell upon the eldest brother who was hanged straight afterwards in the place of execution that is said to have been situated in the site of the monastery. He was hanging there for three days and nights without dying. He was asked by the crowds how it was possible and he explained that he had been praying to Fourteen Holy Helpers. After having heard of the miracle the monarch came to save the penitent‘s life, take down the gallows and have a shrine to the Helpers built.

Another miracle occurred during the construction. A pregnant lady asked the masons what they were building and when she heard of the Fourteen Holy Helpers she laughed and said that she would rather give birth to fourteen babies than believe in some Holy Helpers‘ existence. After claiming that she went to the town gate (now Holy Gate) and really gave birth to eleven boys and three daughters – all baptized in the names of the Helpers.